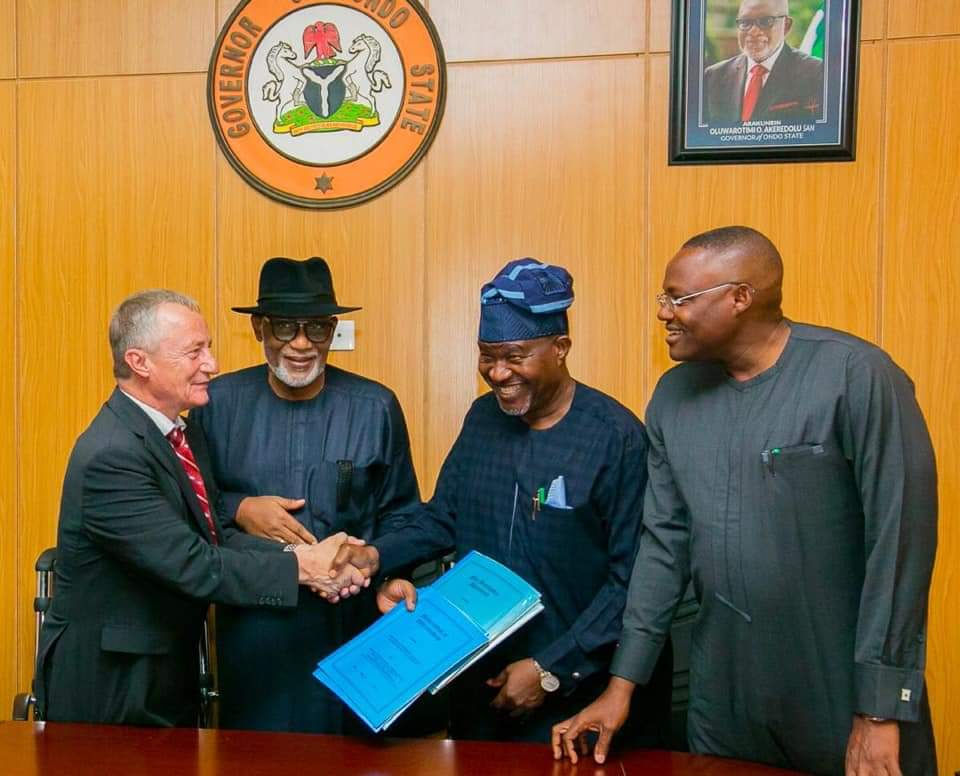 As part of its commitment to improve the health sector, facilitate modern healthcare in Ondo State and end medical tourism abroad , the administration of Governor Oluwarotimi Akeredolu has signed a memorandum of Understanding (MoU) with a Germany-based health institution, Medicus International, to build a USD1.1billion Sunshine medical City in the state.

The Mou was signed by the Secretary to the State Government (SSG), Hon. Ifedayo Abegunde, while the Chief Executive Officer (CEO) of Medicus International, Frank Spriewald, signed on behalf of the company at the Ondo State Governor’s Lodge, Asokoro, Abuja, on Thursday, October 24, 2019.

Speaking at the event, Governor Akeredolu said he was more than convinced that Medicus International has good intention to develop the medical infrastructure in the state.

He said: “I am more than convinced that Medicus has good intention. As I told them when they came, coincidentally about few weeks ago, I was in Germany myself and I saw their structure.

“When I was in Berlin, I was talking to another medical organisation to bring their facility to Ondo State. I was negotiating with them not knowing that someone else was already waiting for this.

“No doubt, we are interested in this. We have made efforts. We are already working on how to secure a land very close to the airport. It is an interesting thing.

“We are prepared to cooperate and we know that this sort of thing is to be done as a joint venture. The interest of Ondo State is there. We are putting land. The joint venture itself will come up.”

Arakunrin Akeredolu also announced that the state government has set up a team led by the Special Adviser on Health to work with the Medicus International.

Earlier, the facilitator for Medicus International, Chief Oludare Bello, said the time for the execution of the project is thirty six months and development will be completed in forty eight months.

According to him, the hospital will deal with all facets of healthcare, adding that the nearness to the airport became imperative because the hospital will have its own helicopter that will transverse other parts of the state for medical purposes.

Chief Bello explained that there will be other facilities in the medical city such as conference Center, Cinema, teaching hospital and nursing school.

He said: “The hospital is a city on its own. The design is premised on the fact that there will be green in the whole hospital. That is to make the patients see the ambience of the hospital when they lean over the window to have a view.

The Special Adviser to the Governor on Health, Dr. Jibayo Adeyeye, said Medicus International is charged with the responsibility of looking for fund for the project, adding that the State government is only investing 100 hectares of land and with other routine approvals.

He said the MoU is coming after serial of engagements to have a memorandum signed between the state government and the organization.