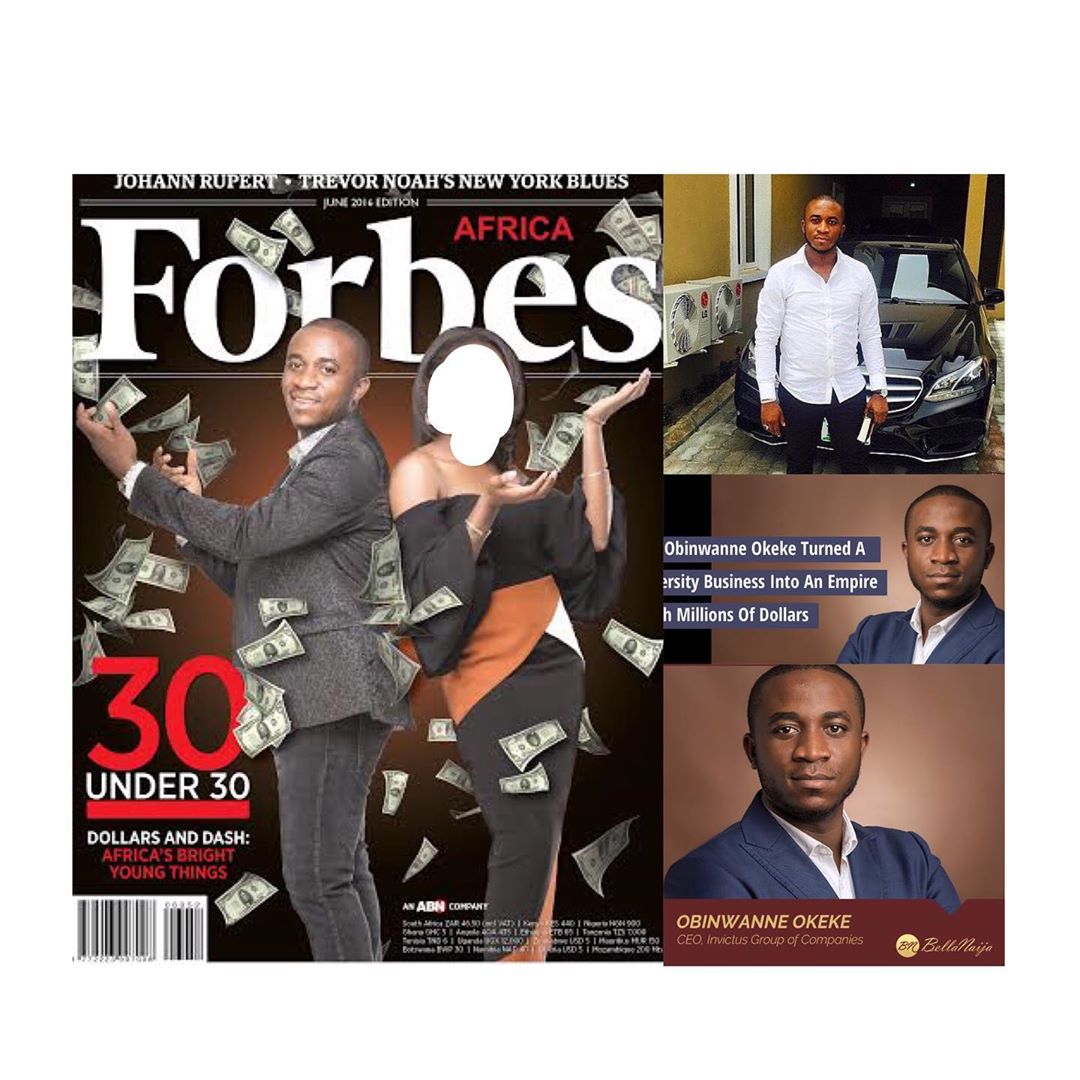 Yes, many a Nigerian billionaire got their validation from the American publication, FORBES, which started the rating trend that has now become the benchmark, from an African perspective, to know who a billionaire is or not.
It is, for many Nigerian money-men, a bragging right to be rated by Forbes, but the case may no longer be the same with the arrest of Obinwanne Okeke fondly called InvictusObi, and the reality that Forbes may have become or been compromised all along.

In a society bereft of role models, Obiwanne Okeke was, until as you read, the quintessential young, wealthy and celebrated businessman, with an expansive fandom of fawning youth and an enthusiastic media gleefully lapping up all stories about him.

At 31, Obinwanne was the poster boy of grass to grace stories; the boy who rose from nothing to something. Many even likened him to the rose that grew out of concrete because he was the 17th child of a polygamous father who died when Obinwanne was 16. Things became difficult for the young man, necessitating his moving from one relative to another. He later moved to Australia to study where he said he “did all kinds of jobs just to survive.” There is no context whatsoever to how he got the chance to travel to Australia if he ever did.

Obinwanne later founded the Invictus Group of Companies, an investment conglomerate dealing in construction, agriculture, oil and gas, renewable energy, telecoms, and real estate. In 2017, Invictus Group was named as Africa’s Most Innovative Investment Company of the Year by African Brand Congress. The same year, he was nominated in the Young African Business Leader (West Africa) category for the All Africa Business Leaders Awards (AABLA). In 2018, he was nominated amongst 100 Most Influential Young Nigerians by Avance Media.

But he became a continental sensation of a sort in 2016 when he was named in Forbes Africa’s 30 Under 30 list and was featured in the magazine’s June cover. In the prologue to the article, the magazine wrote, “FORBES AFRICA spent months looking for the best this continent has to offer. Research coupled with nominations from our readers brought the number to 250 potential Under 30s. We worked for weeks, verifying and investigating, to whittle it down. We favoured entrepreneurs with fresh ideas and took into account their business size, location, potential, struggles and determination.

A panel of judges then debated the final 30.” In the end, the influential American magazine said Okeke was primus inter pares among 600 of the brightest young entrepreneurs, breakout talents and change agents in 20 different sectors that made the list. It went on to use his picture on the cover of that particular edition.
Alas, the Federal Bureau of Investigation, FBI, has revealed that Obinwanne is nothing more than a fraudster.

In a painstaking investigation led by Special Agent Marshall Ward of the FBI, Obinwanne was fingered and subsequently arrested for wire fraud valued at over $12m. According to the investigation, “In June 2018, Unatrac Holding Limited, the export sales office for Caterpillar heavy industrial and farm equipment, headquartered in the United Kingdom, contacted the FBI. They reported that Unatrac had been victimised through an email compromise, which ultimately resulted in fraudulent wire transfers totalling nearly 11million US Dollars. After reviewing the documentation provided by the representatives, the FBI opened an investigation in July 2018.” The FBI discovered that after capturing the legitimate credentials of Unatrac’s Chief Financial Officer, the accused was able to log in and access the CFO’s entire Office365 account, which included all of his emails and various digital files, the logs indicated that between April 6 and April 20, 2018, the intruder accessed the CFO’s account 464 times, mostly from Internet Protocol (IP) addresses from Nigeria.

“With full access to the account, the intruder sent fraudulent wire transfer requests from the CFO’s email account to members of Unatrac’s internal financial team. The intruder also attached fake invoices to the emails to enhance the credibility of the requests,” the investigator stated. The investigation, painstaking and far-reaching, lasted more than a year during which Obinwanne emerged as the principal culprit and has since been arrested while on his regular visit to the United States.