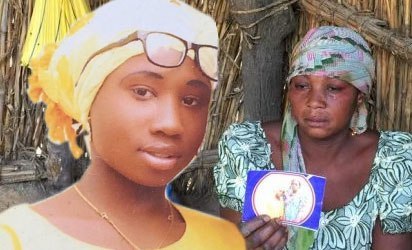 At the occasion, getting her daughter back was all that mattered to Leah’s mother.

”I stand here pleading with the government of the US,” Rebecca said amidst tears and broken English during the event held on Capitol Hill.

Gloria Puldu, a friend of the family and a senior lecturer in the Political Science Department of the University of Jos, spoke on behalf of the family and explained why Leah was singled out among the 110 girls kidnapped by Boko Haram from the Government Girls’ Science and Technical College (GGSTC), Dapchi, Yobe State.

“The other girls, who are all Muslim girls, were released. … When [Leah] was told to renounce her faith and recite the Kalima-e-Shahadah — the Islamic faith creed—she refused to do that,” Puldu said. “That was the only reason that she was kept back.”

After Leah’s capture, Puldu said family and friends did everything they could to get the attention of the federal and local governments in Nigeria without success.

She said that even though many people advocated government action on TV and social media, the Nigerian government has not done anything to free the teen.

“She is a prisoner of conscience,” Puldu said of Leah. “She didn’t do anything, but up till now, we did not get that attention. And that is why we are here. And what [Rebecca Sharibu is] saying is to plead with your government to pressure our government because our government seems unable to secure her release.”

Alheri Magaji is the daughter of the leader of the Adara tribe in Kaduna State. Adara, almost completely Christian, was attacked by suspected Fulani herdsmen from mid-February through April. Nearly 400 people—mostly women, children, and the elderly—were killed.

Magaji, in her late 20s, told the Heritage audience that she was warned not to speak about the persecution her tribe suffered because she might be killed. She said: “But I asked the person that called me, I said, ‘What have I got to lose if I don’t talk?’ My family is killed every day. My dad was locked up for over 100 days. My tribe is now extinct. So if I keep quiet, to what gain will that be?

“The people who die every day are human beings, too. And if I have an opportunity to let the world know what’s happening in my hometown, I will do anything to be able to save—even if it’s one life,” she stated.

She told the story of a mother who was nine months pregnant with her fifth child when suspected herdsmen came to attack the Adara tribe. About 400 suspected herdsmen with AK-47s came into the community at 6:30 a.m. on a February morning. The Adara, as hunters with no assault weapons, ran for cover and were unable to respond, Magaji said.

The attackers told all the Adara children to lie down on the floor, Magaji said, and one of the woman’s sons began to cry when he saw his two siblings’ heads being severed.

“But when they got to the fourth child to slaughter, the attackers couldn’t find the child,” she said. “And [the mother] said God was telling her in the midst of that chaos that he’s alive, and he’s there.”

Continuing, she said they searched everywhere, but they couldn’t find the fourth child. And he was sitting right there, in front of her. And she was trying to reach out and hold her kid, but she couldn’t even. And then when they went out and she ran to her kid, to hug him, they came back inside and then they cut off her left hand, and tried to sever her head, and then kicked her tummy. She started bleeding and passed out. It was a reverend father that came and rescued her.

By the time she woke up, her 9-month-old baby had died; they had operated on her and removed the child. Her only surviving child was the child that God protected from the suspected herdsmen. “So I want to tell you that we believe in God. We know that God is the reason we are even here to tell our story. What we’ve been through—it’s impossible to even stand and talk because it’s so real when you’re living in situations like that,” she added.

Magaji said that although her people are “sleeping under the skies,” they are not asking for relief supplies. “We are here to beg people, beg you, beg the U.S. government, to wade into the armada. We want justice for our land. We need our land back. We are 95% Christian in Adara. Adara is the largest Christian community in Kaduna State.

”So we know it won’t end at Adara alone. There seems to be a systematic plan to take over Kaduna State and Nigeria as a whole. It is purely religious”.

Where Is Your Jesus? – Maisamari

Mercy Maisamari, also a member of the Adara tribe who was kidnapped by suspected herdsmen, described how they came to her parents’ home asking after her father. The attackers kidnapped Maisamari along with her siblings and her mother, walking them for 12 hours to their camp. They remained captive for 11 days. Even after her father paid the ransom the terrorists demanded, the men took him into the camp and beat him before releasing the family together the next day.

Maisamari explained: “After the kidnapping, the government arrested my dad twice. He was taken with some of the nine [Adara] elders away, locked up for 105 days, over what he knew nothing about. They said 66 herdsmen were killed. Our people were killed, but nobody said anything about it, not even the media. But they arrested our elders and locked them up for 105 days without any proof that they did this thing.”

Maisamari also pleaded with the US to help Christians in Nigeria: “We are here to beg the US government to come to our aid. Girls, your girls, like Leah Sharibu and others, are kidnapped almost on a daily basis. They kidnap you, they do whatever, they beat you up, they abuse you. Some of them would ask us, ‘Where is your Jesus? Call your Jesus to come and save you!’”

The embassy says it is lies

Responding to the women’s stories, the Nigerian Embassy in Washington D.C., in a letter to Heritage, dated June 18 and signed by Mr Mohammed Suleiman, the Senior Counsellor/Head of Chancery, said Rebecca, Magaji and Maisamari gave false and uncorroborated allegations about their experiences.

“The Embassy thought that as a reputable and respected organisation, you would allow unbiased individuals at the event to make their contributions,” the letter said among other things.

Firing the first salvo, the Christian Association of Nigeria in the 19 Northern States and Abuja (Northern CAN) condemned the letter.

The Vice Chairman of Northern CAN, Rev. Joseph Hayab, described the Embassy statement as insensitive, inhuman and irresponsible, urging the Federal Government to sanction the embassy staff member who signed the statement and apologise to Leah’s mother and others for saying their experiences were false.

Hayab said for the past one year, Rebecca Sharibu had been in trauma over the abduction of her daughter.

He called on the government to do everything possible to ensure the release of Leah, adding that Nigerians know that the terrorists released other girls that were abducted with Leah, but refused to release her because she refused to convert to Islam.

“How could any humane and sensible person describe such experience as false? This is a woman who has been crying for the release of her daughter. What we expect from that Embassy staff member is to console her and assure her that the government is doing everything to get her daughter”, the CAN leader said.

It’s clear who the liar is —Reno Omokri

Also commenting on the development, spokesman for former President Goodluck Jonathan, Mr Reno Omokri, said the Nigerian government stooped so low to release a statement accusing Leah’s mother of being a liar.

”The woman’s statements are statements of fact and the denial by government casts suspicion on the genuineness of its efforts to free Leah and bring her abductors to justice”, Omokri said.

“Let us examine Rebecca’s claims. One, she said that both her family and her daughter are victims of religious persecution. Is that a lie? The ONLY reason Boko Haram released over 100 other girls and kept Leah Sharibu back is that she refused to deny her faith in Jesus Christ and accept Islam. Is that not a textbook definition of religious persecution?

“Secondly, we see how slow government has been to assist the Sharibu family. This is in sharp contrast to the case involving Zainab Aliyu, a Muslim girl who was allegedly caught with the drug in Saudi Arabia. The usually slow government became a superhero and engaged in diplomacy until Zainab was released”.

He went on, “The second claim that she (Mrs. Sharibu) had not heard from the administration on the release of her daughter for months, this is a self-evident fact.”

Oh his campaign to free Leah, he said, “I wrote a book on Leah Sharibu and I made a million Naira. The money stayed in my account for only five minutes before it was transferred to Leah Sharibu’s mother. The transfer was monitored and confirmed by the Christian Association of Nigeria, on my invitation. I made clothes bearing the image of my #FreeLeahSharibu movement and the sales went directly to her father, Nathan Irmiya Sharibu’s account”.

Meanwhile, the government of the US has pledged to assist Nigeria in the effort to rescue Leah.

The pledge of assistance, according to Empowered Newswire, a news agency, was offered when Vice President Yemi Osinbajo met his American counterpart, Mike Pence, in Washington DC. According to the agency, during the meeting, Osinbajo explained how President Muhammadu Buhari had worked to ensure the release of the over 100 of the Chibok girls abducted on April 14, 2014.

Osinbajo was also said to have disabused the mind of Pence on the claim that the Nigerian Muslim President deliberately opted not to work for the release of Leah because she is a Christian.

It was learnt that following Osinbajo’s submission, the US government offered to assist the Federal Government of Nigeria in securing the freedom of Leah and other abducted girls.

Reacting to the fallout of the US presentation by his wife, Mr Nathan Sharibu accused some people of trivialising the kidnapping of Leah by saying what Rebecca said was a lie.

“Quite naturally, my wife was very sad when she heard that some people claimed she was lying in her testimony in the US. She was moody and refused to eat for days.

“I saw that thing online and it made me also sad. Anybody making such a claim does not know what he or she is doing. Without any doubt, the other girls were released because they were Muslims and my daughter refused to renounce her Christianity,” Mr Sharibu said.

“But our desire more than anything else is the release of our daughter because she has lost so much ground in her academic pursuits. She is supposed to have made much progress by now in her quest to acquire a degree in medicine to become the first doctor in our family.

“It’s my prayer that her desires will not be cut short. Only God has kept us going in this long period of waiting to see our daughter return to us in one piece.”