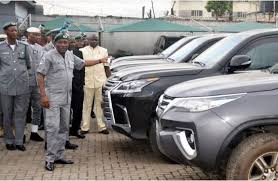 But the government may reconsider its decision after the successful implementation of a new initiative by the Nigeria Customs Service and the Customs Service of the Republic of Benin to automate and network all electronic information about incoming cargoes through the border.

The Comptroller General, NCS, Col Hameed Ali (retd.), who was represented by the Assistant Comptroller, Information and Communication Technology, Benjamin Aber, at a stakeholders’ meeting on the new initiative, expressed confidence that with a successful implementation of the bilateral electronic connectivity programme between Nigeria and Republic of Benin, the Federal Government might lift the ban on items coming through the land border.

With declarations made for imports transiting from either of the countries electronically shared, the process of import and export would be done in a transparent manner and the government seeing such transparency would be convinced to relax its stance on land border importation.

He said “Vehicles were formerly being imported through the Seme border, but suddenly it was banned because the pressure of enforcement of anti-smuggling for vehicles and claiming of lives and revenue were becoming too alarming, so the government had to restrict the importation through Nigerian ports.

“When vehicles came through the land border, we did not have a record of how the imported cars came here and fake documentation became a common phenomenon. The ban was just a control measure against the practice.”

He added, “By the time we successfully deploy this reliable, transparent and predictable programme that would assist government agencies, not only Customs, to control and regulate the importation of vehicles, the government may decide to relax such restrictions.”

Ali said the establishment of the automated platform and bilateral connectivity meant that any truck that left the Republic of Benin, the information would already be remotely sent in English to Nigeria Customs Service system.

He also gave the assurance that illegal checkpoints mounted by Customs officers and other security agencies along the border corridors would disappear automatically.

“The roads also have to be fixed, because we cannot automate clearing of goods between the Customs and at the end, the stakeholders would be complaining,” he pointed out.

He said the new platform would be deployed by June 20.