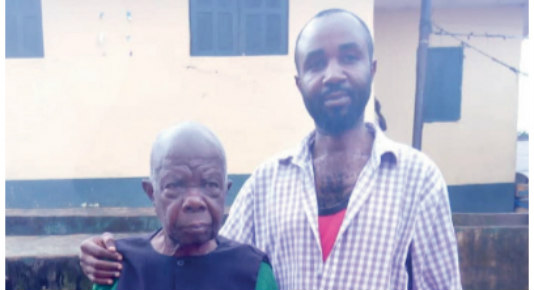 Oldest prisoner in Nigeria, Celestine Egbonuche, has been freed from Enugu Maximum Prison. Pa Celestine, who is said to be over a hundred years old, has been imprisoned for about 19 years, Igbere TV reports. Igbere TV learnt that he was released on Thursday to his only surviving daughter, Chisom Celestine, through a non-governmental organisation, Global Society for Anti-corruption (GSAC).

Celestine, a native of Amachara-Owerre, Akokwa in Ideato North Local Government Area of Imo State, was condemned to death along with his son, Paul, and another relation, now 87. Imo State governor, Rochas Okorocha, last week granted him state pardon following campaigns championed by GSAC. Immediately after his release, Celestine was taken to St. Daniel’s Hospital in Enugu where he was examined to ensure that he was fit before going home.

Regional Director, GSAC, Amaka Nweke, said: “Actually on the 5th of September, we petitioned the president of our dear country and past Governor of Imo state, Rochas Okorocha pleading for pardon for Pa Celestine

.
“His pardon was granted based on his age and his health condition because we found out that his health condition was worsening every day. As a centenarian, he is not supposed to be in prison. When you check other countries you can’t find someone of his age in prison. “On Sunday, I got a call from the former Attorney General of Imo state that he has been granted pardon by the state government.” The centenarian’s daughter also called for the release of her brother, Paul, saying that he was innocent of the crime.