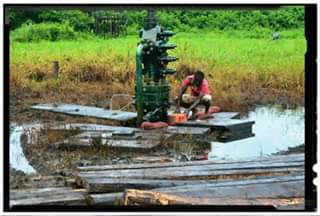 THE Ekiti State government has called on the Federal Government to allocate oil wells to states of the federation to make them more buoyant and less dependent on the Federal Government for survival. Deputy Governor of the state, Otunba Bisi Egbeyemi said this is necessary to make the states more viable and also for them to meet their obligations. Speaking during an interview on Ekiti State Television (EKTV) monitored at the weekend, Egbeyemi charged the President to strip some Nigerians of their oil blocs and allocate same to the states to ensure development. In his words,

“The victory achieved by the President was a victory for Nigeria indeed and the masses who reposed confidence in him and voted him back to office. “This is the time for him to take some bold and radical decisions to make life better for the citizenry and ensure economic recovery. “President Buhari, during his second term, must make the states buoyant. He must take oil wells from individuals and allocate them to the states so that they can pay their workers, build more infrastructures and establish industries. We have some individuals holding oil wells having billions of Naira coming to them every day while majority of Nigerians are living in poverty.”